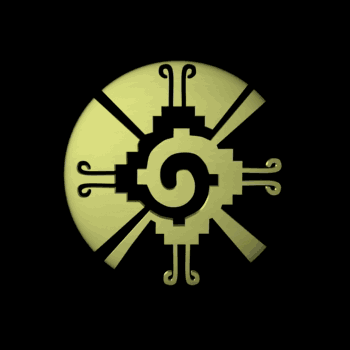 The ancient Mexican called Toltecáyotl, to the set of Toltec wisdom and knowledge. The Toltecáyotl probably began with the domestication of plants, agriculture and the invention of the corn eight thousand years ago and has evolved and polished over the centuries.

In spite of the fact that the conquistadors of yesterday and the colonizers of today, have tried to deny all capacity and intellectual value to the native peoples and to the children of the sons of the ancient grandparents, wisdom is still alive and has remained, ducking in popular culture during these five centuries. Much of this wisdom has remote origins, and even though we may not understand it, we live with and it is this subtle quality, that makes us different from other peoples and gives us the "touch" of being Mexican. It is what gives us "Face and own heart".

"The highest of the peoples "institutions", their creations, that support the structure of a culture, all that and probably also other realities, were included in the meaning of Toltecáyotl". (Miguel Leon Portilla. 1980)

116 During a season of the year Venus appears in the morning as the morning star, in another season appears as the evening star and during another time Venus does not appear in the sky.

There is a rich heritage of ancient wisdom in the native peoples and peasants of contemporary Mexico. In the oral culture of some peoples the historical memory remains of the so-called "White Brotherhood". Ancestral heritage of the Toltecs and the Toltecáyotl that did not disappear in the collapse of the late Classical period and that still Cortés registers in the ?Cartas de Relacion? 117. In fact, Cortés relates that when the Spaniards came to the shores of Veracruz, Moctezuma sought advice from the wise men of the White Brotherhood living in the Cholula Calmécac, where the "píltin" children were educated, and the nobility which would govern the peoples of the Triple Alliance.

"Toltecáyotl, literally translated, means toltequity: essence and collection of all Toltec creations. But to better unravel the richness of its connotations, this term of abstract and collective sense is a word derived from toltéca-tl. Ancient Mexicans used it to indicate what they considered their heritage, inspiration seed and factor of further achievements. The Toltecáyotl, Quetzalcoatl legacy and the Toltec covers the black and red ink, - wisdom-, writing and calendar, book of paintings, knowledge of the paths that follow the stars, the arts, including music of flutes, kindness and righteousness in the treatment of human beings, the art of good eating, the ancient word, worship the gods, talk with them and with oneself... "." (Miguel Leon Portilla. 1980)

We shall not deeply understand history and the Anahuac culture without knowing the philosophical foundation that structured this civilization over thousands of years and that in the last five centuries, only has been "concealed", but it still represents the true essence of our unconscious identity. All the grandiose material and immaterial works of this civilization, that were transformed by the minds, souls and hands of our ancient grandparents, come from a very clear and defined line of thought from its origins. This "creative power" is what brought matter from its natural state and shaped it, colored it and gave it sentiment. These were the men and women who learned to

117 The Cartas de relación written by Hernán Cortés, were directed to the Spanish Emperor Carlos V. In these letters, Cortés describes his journey to Mexico, his arrival in Tenochtitlan, capital of the Aztec Empire, and some of the events that would result in the conquest of Mexico. Hernán Cortés was of noble lineage and studied for some time Latin, grammar, and law at the University of Salamanca, but without graduating, he gained the knowledge and skills necessary for a good writer, his letters have true literary and historical value, because descriptions made are firstly contained in the Chronicles of the conquest of the Aztec Empire.

?make lie" clay, metals, textiles, wood, precious stones, plant fibers and a number of materials taken from nature and humanized by incorporating them, with a high aesthetic and mystical sense, to the millenary world of the Anahuac. It was these wise men and women that learned from nature, the skies and the spirit, to shape "own faces and real hearts" in their children and young people.

Across this vast and immeasurable artistic heritage that is alive in the so-called archaeological zones and saturates Mexican museums and the world, inevitably arises from a thought structure. It signifies that the highest creation of the Anahuac civilization is overall knowledge that explains the world, life and placed human existence with a high responsibility to contribute to generating forces for the world humanization world and its maintenance through harmony, equilibrium and measure. The Anahuac philosophy or Toltecáyotl is the language in which the spirit expresses itself; each of their wonderful creations represents words that hold an eternal dialogue between human beings and the immeasurable, the divine and sacred.

We cannot continue to condemn the Anahuac civilization to the same intellectual contempt, subjected by euro centrism and colonization. The Toltecáyotl represents the most important and least known ancient Mexican heritage. It is from the Toltecáyotl, the most important Toltec creation, where we need to start to know and interpret the past and therefore understand our present. The intellectual and cultural decolonization is vital to be able to build a future, "our own". The Toltecáyotl must be the line of thought that allows us to "recover ourselves". The challenge is to take the wisdom that exists within ourselves to the conscious everyday plane and with this knowledge build our present and design our future.

Five elements comprise the philosophical heritage of the ancient grandparents. Apparently they are hidden and camouflaged in the immense cultural syncretism of our days. They seem unrelated and trivial elements when independently considered, unless they are integrated as a whole. However, they are the "essence" that distinguishes our ancient people and the philosophical thought heritage in everyday life. The cultural elements, inherited from our ancient

philosophy are: "the high spiritual and mystical vocation for life, family defense and its values, the immeasurable love for nature, the tireless constructor spirit and the permanent optimism for life".

Indeed, the most important and valuable heritage from the ancient grandparents is not material. It is not in the archaeological sites, museums or in precious metals. It is instead in the world spiritual and life perception. In the values, principles, feelings, attitudes, traditions, uses and customs, that have been changing and adjusting in these five colonization centuries, but that keep alive the essence of a civilization that is not dead. It is alive in the current day conglomerate of peoples and cultures of the Anahuac. Between the syncretism and appropriations, it has enriched not only from western culture, but also from Africa and Asia.

True History of an unknown Mexico