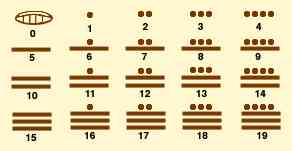 Mathematics was a fundamental knowledge field of our ancestors. Necessary not only for construction of monumental and exquisite knowledge centers, but in the field of calendars and time measurement. Indeed, the Mayans invented the mathematical zero, and in their calendar measurements the figures used are both incredible and perfect.

The ancient grandparents had three different calendars, the three assembled into a perfect one. The first was 260 days and in relation to the Moon. The second was 365-., related to the earth orbital movement around the Sun. The third was 52 years and was perfectly synchronized with the earth orbital movement around the group of stars called "The Pleiades" or Seven Sisters (Messier object 45). Must also mention the Venus cycle.

"We also know the relationship that exists between the architectural disposition of Teotihuacan and the passing of the Pleiades zenith every 52 years, as a big year in the Taurus constellation, this great year is the exact time at which both counts join: the 260-day ritual that relates to Venus and Earth orbits, and solar agricultural of 365.25 days, which happens every 18,980 days, i.e. one Xiuhmolpilli." (Maria Elena Romero Murguia. 1988)

The calendar was so perfect that, when Europeans arrived and knew it, they realized that their Julian calendar57 was wrong and adjusted their calendar to ours, and called it Gregorian58, since it was Pope Gregory XIII who ordered the reform to the Julian calendar in 1582.

Hernan Cortes de Monroy y Pizarro, 1st Marquis of the Valley of Oaxaca; 1485 . December 2, 1547) was a Spanish conquistador who led an expedition that caused the fall of the Aztec Empire and brought large portions of mainland Mexico under the rule of the King of Castile in the early 16th century. Cortes was part of the generation of Spanish colonizers that began the first phase of the Spanish colonization of the Americas.

"The origin of the prehispanic computation has been traced from its Olmec roots. Remember that the word Olmec derives from two words: ollin: movement and mecatl: rope (mecate), in reference to rope measurement; i.e. the measure of movement or the movement measure. This means that the Olmecs were known probably as cosmic movement measures and its expression in geometric shapes... ". (Ma. Elena Romero M. 1988)

Mexico possessed 75% of the planet's biodiversity. Our ancestors knew the medicinal uses of food, utilities, surprisingly almost all plants, minerals and animals; which inter alia allowed them to develop one of the perfect and ancient medicines of the world, which has survived to date. The Codex de la Cruz-Badiano59 (1552), the amazing cranial trepanning found in burials, the massagers, those using plants (yerberos) and healers, is testimony of the permanence of this millenary wisdom that has resisted disappearing. It can be stated that global Pharmacology60 foundations were built on contributions from three civilizations: China, India and Anahuac. To appreciate the complex and sophisticated knowledge of ancient Mexicans of the human body will cite from the book "Human body human and ideology., the Nahuatl names of the eye parts and thus infer the knowledge degree about human medicine:

calendar was named, by a decree signed on 24 February 1582, a papal bull known by its opening words Inter gravissimas.. The reformed calendar was adopted later that year by a handful of countries, with other countries adopting it over the following centuries. The motivation for the Gregorian reform was that the Julian calendar assumes that the time between vernal equinoxes is 365.25 days, when in fact it is about 11 minutes less. The accumulated error between these values was about 10 days when the reform was made, resulting in the equinox occurring on March 11 and moving steadily earlier in the calendar. Since the equinox was tied to the celebration of Easter, the Roman Catholic Church considered that this steady movement was undesirable. 59 The Codex de la Cruz-Badiano or Libellus de Medicinalibus Indorum Herbis (Latin for "Little Book of the Medicinal Herbs of the Indians") is an Aztec herbal manuscript, describing the medicinal properties of various plants used by the Aztecs. It was translated into Latin by Juan Badiano, from a Nahuatl original composed in the Colegio de Santa Cruz de Tlatelolco in 1552 by Martin de la Cruz that is no longer extant. The Codex is also known as the Badianus Manuscript, after the translator; the Codex de la Cruz-Badiano, after both the original author and translator; and the Codex Barberini, after Cardinal Francesco Barberini, who had possession of the manuscript in the early 17th century.

Engineering with our ancestors reached unimaginable levels. Our civilization mixed very well engineering with astronomy and religion. In fact, beyond the challenge to physics laws, mathematics and nature perfection; the Anahuac monumental constructions had the goal of harmoniously uniting mankind with earth, planets, and stars, in an amazing and wonderful approximation to the divine and universe sanctity. Because our ancestors lived for thousands of years with an spiritual sense and in harmony with the universe.

"There was no doubt for him 62 that the Mayans had been accomplished mathematicians, astronomers and navigators, and who were familiar with flat and spherical trigonometry, that placed them in a position to calculate the world size, calculate the distance from pole to pole, and estimate a Meridian length. He believed that, as the Egyptians, the Mayans had added their cosmogony and religiou

Alfredo Federico Lopez Austin (born in Ciudad Juarez, Mexico March 12, 1936) is a Mexican historian of uncommon originality who wrote extensively on the Aztec worldview and on Mesoamerican religion. As an academic teacher, he has inspired generations of students, but his influence extends beyond the boundaries of academic life

conceptions to their sacred buildings, particularly the pyramids". (Peter Tompkins. 1981)

True History of an unknown Mexico of Guillermo Marín.