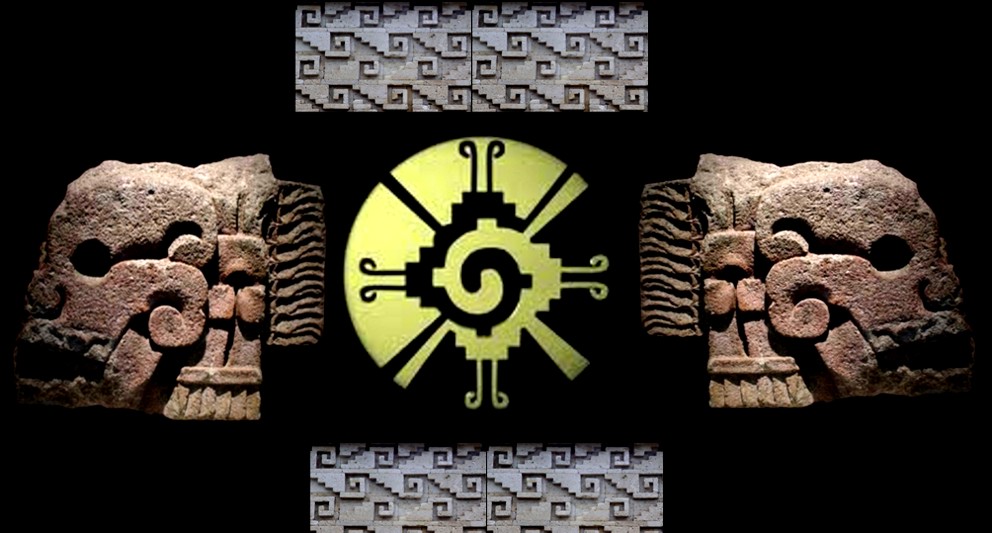 we do not really die,

because we live, we rise,

we continue to live, we wake up,

this makes us happy...

Is it real we live on Earth?

Not forever on Earth: just a little here.

Even if jade it breaks,

even if gold it breaks,

even if Quetzal feathers they tear,

All the peoples of the world have a special space for death, especially because in death is the answer to the third question of the ontological problem of being, "where I will go after death". But there are two civilizations that focused especially their Cultural development on the concept of death; the Egyptian people and the ancient Mexicans. Indeed, our old grandparents defined life and death as a pair of complementing opposites. A duality that is opposed, and at the same time is needed, since there can be no life without the death nor death without life.

The ancient Toltecs, men's knowledge of the old Mexico, sought in their majestic centers of knowledge, today called archaeological sites, to reach eternal life through the worldly life "death". That is, that only before death of earthly attachments the spirit was released, to start a luminous journey towards eternal life. Therefore, in the iconography, since the preclassical Olmec period, through the Toltecs of the classical up to the Aztec Postclassical decadent period, the bones in all prints, paintings and sculptures, represented eternal life, because the last thing that disappears in a corpse is the skeleton (what is left of the material life).

Our old grandparents wondered where will they go after death.

The path of the divine duality.

By any chance is your home the place of the emaciated?

would perhaps inside the sky?

or only here on Earth is the place of the emaciated?

Because life on Earth was completely fleeting for them, they presupposed that human beings have a more important destination, an immeasurable place we shall reach after passing this earthly existence. Death is a step towards eternal life.

They assumed the human being as a warrior. A fighter from the cosmic forces that govern the universe and of which they are an active part. The warriors were formed in the Calmecac, School of higher studies that allowed the applicant, whether male or female, to forge as a "warrior of the spirit", since they should initiate a massive battle in the depths of themselves! against themselves! Against the weaknesses of their spirit and the material temptations. This fight was poetically called "Flowered battle". This war is waged with "flower and song", i.e. with the weapons of art and wisdom and in the depth of the individual. The objective of this impeccable battle was to "flower the heart and give oneself as food to loved ones". This venerable Flowered battle forged "own faces and true hearts" among the children of the sons of the old grandparents for many centuries that lasted through the splendor of ancient Mexico.

Thereby we can understand and comprehend that our ancestors had a deep interest in the spiritual life and the significance of existence. That they reached levels of energy and spiritual knowledge of the human being, so huge and advanced, that today we still cannot fully understand, but which are still in force and vital for human existence.

In the Anahuac historical memory, we find that our old grandparents had four places where their dead would go, according to their behavior throughout their life.

The first and most important and appreciated, was called "Ilhuicatltonatiuh", bright place reserved for warriors of the spirit, male or female, having devoted a lifetime to the "flowered battle", having achieved a "flourished heart". Thus, the "warriors of light" accompanied the Sun from dawn to the zenith in its ascending path, overcoming the gravitational forces that drag matter into the darkness of ignorance. The "warriors of light" also accompanied to the Sun, but from the zenith to the sunset, until it went down into the underworld, Lordship of Mictlantecuhtli "The Lord of death".

The second, called "Chichihuacuacho" was where the dead went in the ancient Mexico, was reserved for those children who died newborn infants at tender age. This place was like a paradise in which there was a huge tree from which droplets of milk fell from its branches and children fed there, lived happy in this "children paradise" which was supposed where children would live until the birth of the sixth Sun, time when they would be born again.

The third place called "Tlalocan" was reserved for those who died of causes related to water, such as the drowned, lightning deaths, lepers, and water retention. The Tlalocan, Moon mansion, was a paradise in which ideal conditions existed, pleasant and fresh.

Finally, there was a place for those who had not achieved the luminous warrior death, nor the early death as a child, nor sacred death water-associated. A really terrible place because it meant nothing, the sterile death product of an empty life, death without consequences and significance; death for nothing. This is the fourth place where the dead went, according to the ancient Mexicans, was Mictlán. Place where people died of natural death, whether Lords or macehuales, without distinction of rank or wealth.

After the funeral, the dead in question had to cross by a long and mighty river called Apanohuaya, for which the help of a dog (techichi) was needed. Subsequently already stripped of his garments had to cross mountains that always were hitting one against another and were called Tepetlmonamictia. Then they had to go through a bristling hill, full of sharp flints, to then continue onto eight hills called Cehuecayan, where was always falling a terrible snowstorm, then had to cross 8 Plains where an icy wind blew through as knife. Then they had to follow a path where " unknown shooters" sent arrows. Then they reached the Teocoyleualoyan, where a huge Tiger would eat their heart, and without it, would fall into the Apanviayo, in whose wastewater was the terrible lizard Xochitonal. It was then that they had finished the painful journey of suffering, going then before the very Lord of death (Mictlantecuhtli) who would say to the deceased... "your earthly sorrows are finished, therefore go to sleep your deadly sleep". After four years of travel by the Mictlán! nothing was their final destination!

This is how our old grandparents interpreted death from the philosophical aspect. This Cultural heritage is still alive and present in our culture, which only reflects the millenarian vision of our roots. The feast of the dead or those of Tonantzin-Guadalupe, is the vivid and undeniable presence of our "Indian heart". Contemporary Mexicans are philosophically and spiritually indigenous. Our profound relationship deep with life, death, family, nature, friendship, work, is closer to our mother culture, than the Western culture. The problem is that during the last 500 years we have been educated to feel shame and contempt of ourselves and have forgotten the essence and luminous inheritance of our old grandparents. Education that has always kept us defeated and submissive, powerless before the foreign and at the same time, fierce executioners of our primary culture and our people. Copying fashions and foreign cultures to supposedly make us "modern and progressive", but what really happens, is that we only become consumers of scrap products and are we left in spiritual and economic misery.

Celebrating the feast of the deads day with deep and authentic emotion, attached to tradition and custom, is starting a journey to the heart of the ancient Mexico, an encounter with ourselves.

[1]   Cantares Mexicanos is the name given to a manuscript collection of Nahuatl songs or poems recorded in the 16th century. The 91 songs of the Cantares form the largest Nahuatl song collection, containing over half of all known traditional Nahuatl songs. It is currently located in the National Library of Mexico in Mexico City.