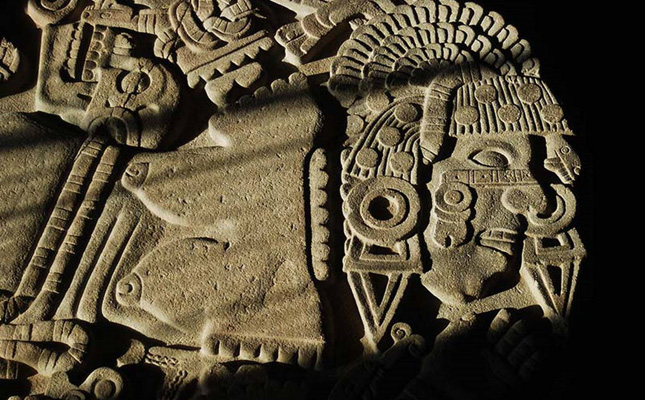 The Pochtecas and the Warriors.
The pochtecas came to have great power, not only economic and political, but even military. To the extent that at a point in time they confronted the Tenochtitlan Tlatócan, but were defeated and punished. By the material ideology two activities were strengthened and enhanced than never before were relevant in the Anahuac, war and commerce.

Such was the momentum and growth that merchants and commerce had that, during seven thousand four hundred years of human development in the Anahuac civilization, having reached great advances in science, arts and philosophy; they never needed to create a currency. It was with the mexica strength and expansion and commerce that shortly before the European invasion began creating in the Anahuac the first forms of currency, with cocoa and copper articles. This does not demonstrate ancient inability, what it demonstrates is that ancient grandparents did not base their civilization and human development in trade and consumption, so for thousands of years did not need to invent a currency. However, because of the Aztec ideological changes made to the Toltec wisdom legacy, the millenary spiritual tradition of the Anahuac began to suffer severe changes, such as war, trade, currency and private property. "During the epoch under study, develops a significant evolution. Although theoretically, private property continues to be collective, in fact, land assigned to a tecuhtli,[8] was inherited to his descendants. Then the land became pillalli, "land of pilli?[9]; that is, as the children of the dignitaries, who by birth were entitled to senior positions, in addition they also benefited from inherited property. A private domain is built at the expense of a public domain. We would stretch the statement, if it would be stated that the emperor and dignitaries were large real estate owners: in fact, the idea remains that the community had the principal rights. But we would be equally wrong to assert that this right was the only recognized in real life. Mexican society was in full transition and private land appropriation developed, sort of by the minute; prevailing habits and customs gradually shifted more and more from tradition." (Jacques Soustelle. 1955)

This is a very important point, because if we consider what has been said above with regard to weapons, it is noted that the Anahuac civilization expansion and human development was not based in weapons nor trade during the Preclassical and Classical periods, and that the ancient tradition transformation occurred less than a century before the arrival of the spanish invaders.

The western culture is precisely busy in the development of weapons, commerce expansion and private ownership, fundamental reasons to start the conquest of the world. Up to this day, the western culture military technology and business interests continue to subdue other cultures and countries. Their obsession of destroying current and ancient organization forms of the peoples and imposing "parties democracy", are means to fragment and weaken society, open markets, impose free enterprise and the private sector over common wealth, characterized by England in the 19th century and United States in the 20th and 21st centuries. Western culture is supported on weapons, trade and private property.