2. THE MYSTERY OF THE EAGLE AND THE SERPENT 3.1 Human nature The human being is essentially a "good" being. Its nature is positive and biophilic. During childhood humans naturally show our ability to build a world reasonably stable and in harmony. 3.2 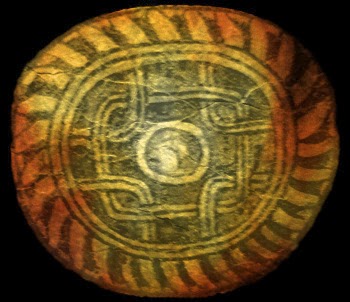 The human being is essentially a "good" being. Its nature is positive and biophilic. During childhood humans naturally show our ability to build a world reasonably stable and in harmony.

The human being is equipped with a wide range of feelings, ranging from the brightest and positive, to the darkest and negative. However, their "nature" prompts them to naturally highlight positive, without being extent of expressing the negative.

However, we have also been given spiritual energy. The divine and sacred mystery that holds the human existence. The divine breath which has given consciousness to corruptible matter, seeks to detach from it and break the limited perimeter containing it and restart its wonderful return to the generating whole, Ipalnemohuani "he for whom we live", Tloque Nahuaque "he who is here and there at the same time, who is everywhere at the same time", Yahuali Ecatl "he who is invisible like the wind and impalpable like the night".

Because if humans have a gravitational force that condemns their matter to disintegration, their spiritual energy is also subject to a force that pulls it back to the generating source. The principle of our divine duality. Ometeotl "the divine duality", is not only a "God", but an essential principle of the being that governs the universe.

The wonder and terror of being a human being is precisely the possibility of having "consciousness of being" and self-determination. Of being able to create their own fate and have clarity and inner strength to confront the powerful forces of the universe, fighting in the depths of their heart or being sufficiently stupid to collapse into nothingness.

Human beings and peoples that achieve a degree existential maturity. Those who have lived long enough to learn, not only to satisfy their material subsistence elementary basic needs. But that they have had the intelligence and depth of approaching the mystery of life and feel and reflect on the need to transcend the material realm and think about the unfathomable mysteries of spiritual transcendence.

Persons and peoples who have achieved gathering and systematizing the wisdom and human experience of many generations through their culture, both, for solving issues representing challenges to maintain satisfactory conditions in material life, as well as exploring the possibilities of penetrating into the unfathomable arcana of the purest forms of energy management.

The challenge and mystery of life, not only imply material subsidence. Humans have not been granted the wonderful opportunity of being alive, only to work, consume and possess. Which by the way is necessary, but only as a means. The Supreme goal is to transcend the material plain of our existential "reality" and understand the mystery of life with humble passion.

Human greatness consists of sensing the mystery of life and acting accordingly. Human beings not only came to survive, but fundamentally to transcend. Has to build, rebuild, create and maintain the material world. Which turns to be basic and fundamental. But with the clear certainty that it is only a medium that allows him the most important part of it, to transcend this first basic level we call world or reality.

The human being is like a flake of conscious energy in an infinite universe of energy loads. We are absolutely nothing, and however, we have been given the wonderful possibility of having consciousness of the Whole. The divine mission of human beings is the same as a drop in an ocean. It is drop and an ocean at the same time, what a sublime contradiction.

As above it is below; as below is above. Tloque Nahuaque the "Lord of the near and the next". Human beings are part of the whole and the Whole conform human beings. In the same way all human beings who have existed live in me and I live in all of them. The strength of the human being is the community. The "we" collective over the "I" individual.

3.13 The world and the Universe

Private property attempts against universal laws. Human beings are part of Earth and Earth is part of human beings. We all are part of Tonantzin "our dear mother". Cultivating the land is loving Tonantzin. Production crops are a divine gift. We work to live and have the basic-material- needed to face the challenge of consciousness and of being conscious. We work in the material field, to have the basics so we can work the spiritual realm.

Production only for economic gain is degradation. Creative and physical energy of human beings and peoples, should not be wasted in the production of material objects that alienate and brutalize the human life. Comfort and pleasure generated by objects and consumption, take human beings away from the spiritual path and brutalize their mind and senses.

The exchange of material goods is a minimum need of human beings and peoples who seek the release of the spirit from matter as a fundamental part of their existence. Commerce is immoral because it encourages abuse, illicit gain, and the appropriation of producers work. Commerce and advertising debase and denigrate human life. The trade profession is a necessary evil, like the executioner and the gravedigger.

Consumerism is a degrading vice that desensitize, perverts, and deviates human beings from their spiritual purpose. The pursuit of happiness and existential significance through consumption, has been the way of chaining human beings to self-destruction and degeneration of peoples. The hoarding is a degradation and human baseness. Belongs to people with a huge spiritual misery.

Human beings and peoples since the beginning of the most ancient civilizations fight against of this duality. Matter and spirit, the jaguar and Eagle, night and day. Complementing opposites that form the universe. Ancient civilizations have left the deepest and solid foundations of this ancient human challenge. It has always been thus. It will always be. The wonderful thing about human existence is to be aware of this truth and fight accordingly. Human greatness comes from its weaknesses and vulnerability, and of course, from the struggle to overcome them.

The quetzal is the most beautiful bird in flight toward the heights. The Snake is the wisest animal that crawls over the ground. Heaven and Earth, spirit and matter, Eternal Divine duality. The challenge of human beings is balancing the quetzal and the coatl comprising us, and embody this mystery in the practice of everyday life. The "Quetzalcoatl", philosophical symbol of the highest human aspiration.

Life, as the great opportunity to purify and develop awareness of our spiritual energy. Life as the possibility of developing the spiritual potential that manifests itself in our being. Material life as the means to polish and enrich spiritual awareness. The body as anvil of the spirit. Life as a battlefield of the eagle and jaguar. Life as a wonderful opportunity to become a warrior of the flowered death.

The wise and ancient Toltec had women and men taking the challenge of transcending the material life. Were called "warriors" because they would fight the cruelest and disheveled fight that a human being can face. The fight against oneself. Against stupidity, laziness and human neglect. The fight against the gravitational forces that drag the matter to its degradation.

This struggle she was called  Flowered battle-, as its symbolical purpose was to "make the heart flourish". The warriors weapons were "flower and song" symbolically understood as beauty and wisdom.

The mysteries of the spirit and of having consciousness have no time or space. The wisdom of Zoroaster, Buddha or Quetzalcoatl to rich a high consciousness development and the spirit liberation from the matter are universal. Human wisdom speaks the language of the spirit. The mystery of life is and will remain the same.

Human beings we have debated between light and darkness, between heaven and Earth, between spirit and matter. And we will continue debating until the world is world and until the universe ends, until the end of the sixth Sun. Human beings and peoples shall never reach the total brightness or darkness, as we are under universal law of rhythm.

We are a drop in this huge ocean in the midst of this dark night, but in the end a drop. A small droplet that has its time and place. A marvelous insignificance that can decide and is self-determined. That is precisely the wonder and the responsibility of being a conscious person. Of making our hearts flourish through a flawless, sober and honest life.

Or be confused permanently; "trying to find in loving someone true love that lies in one's self, trying to find the way in the material world and not in the spiritual, trying to make the existential realization and happiness in the realm of having and not in the "being". Attached to objects, people and ideas, quickly falling into the depths of human stupidity. In the midst of dissatisfaction, desolation and internal emptiness.

There is nothing new under the Sun. Nobody does anything to anyone. Each person in the depths of their being has the ancestral wisdom. Each person must assume their existential responsibility or put their head in the hole of material aberration, internally knowing that they are wasting the wonderful opportunity of being alive.

Therefore, Tezcatlipoca the "smoking mirror" is revealed before us as the "internal enemy", the internal force that confronts us with our own face and pushes us to fight for a "true heart". The Lord of the smoking mirror, the strict teacher of spirit warrior apprentices in "the House of the youth".

Life and death. The spirit and matter. Consciousness and unconsciousness. Humans are good in principle, although we are subject to the gravitational forces that drag to matter to its corruption. The fight is not against matter; matter is part of the pair of complementing opposites. The fight is against our stupidity and laziness.

Human beings never got to be bad, just stupid and irresponsible. Lazy and cretins that we give ourselves without hesitation to the terrifying forces of nothing, that alienate and brutalize us in the fundamentalism of consumption in a material world which, despite everything, is only a fleeting mirage.