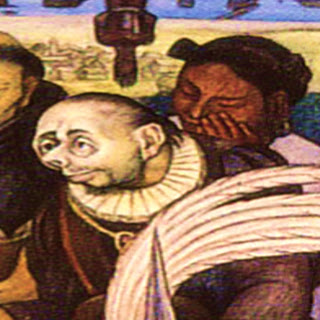 From childhood, I was always taught to call the Spanish invasion "the conquest of Mexico", as if I were Spanish, and as if in 1521 Mexico existed. So today we Mexicans, so colonized, malinchistas and racists, use in our daily vocabulary the concept of "the conquest of Mexico" instead of the invasion. Which is not the same thing, but it is the same. Because, how would it be heard if someone said, "last week robbers came to conquer my house, killed the dogs and took my flat screen and my computer".

The point is that we see invasion as something natural and normal, and as if we were spaniards. Invasion implies violence, robbery, murder and enslavement. We see invasion, in part, because we have been taught to think and see history, with the ideas of Hernan Cortés; and in part, because invasions continue to occur daily. Indeed, it is pathetic, but that is how it is. Official historians, most of whom are pro "Hispanics", take the writings made by sword and crucifix adventurers, as truths that do not accept the slightest doubt or criticism. Dogmas with which the official history is created. With them, they rehash and rewrite the same theme. For example: the version of the facts written by Cortés, is totally biased towards himself and very relevant characters and actions disappear. 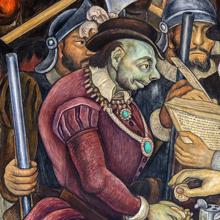 Cortes was a psychopath, no exaggeration. He murdered anyone who opposed his desires or interests, starting with his own wife whom he strangled at his Coyocan?s house. But we can also talk about the expedition men that he ordered murdered, because they wished to return to Cuba and deliver him to justice, because he had betrayed Governor Diego Velázquez, for which he had a personal guard to protect him from his own men. Cortes was a rapist, there was no woman who crossed his path who was not raped. Hispanic historians keep silent about the fact that Cuauhtémoc's wife and daughters were raped, not only by Cortés, because they were spoils of war, as were all the women of the Mexica nobility, but they cowardly keep quiet about it.

But also, in their texts, because now it is known that since the crown instituted a residence trial for all his misdeeds, he was not allowed to leave Spain and was forbidden to write about the invasion, reason why, as always, Cortés did not respect the law and wrote the book, Historia Verdadera de la Conquista de la Nueva España (True History of the Conquest of New Spain), under the Bernal Díaz del Castillo pseudonym, and commissioned Francisco Hernández de Gómara to write the book Historia de la Conquista de México, which Cortés dictated, to try to maintain his popularity as the bravest and most daring conqueror in Europe, something that helped him in the very long trial he went through. Cortes was an uncomfortable character for the crown, on the one hand he was the Spanish conquistador prototype, but on the other hand, the crown knew he was a traitor and not trustworthy.

Cortes had a betrayal vice and mania of as a way of relating. He betrayed everyone who had the misfortune to come in contact with him, starting with the Cuba Governor Cuba. He betrayed his fellow invaders. In the residency trial he was accused of not complying with the stolen gold equitable distribution. He also betrayed the investors who financed the invasion. He betrayed his Anahuaca allies after the Tenochtitlan victory and some, like Xicotencatl from Tlaxcala, had him murdered. And the ultimate betrayal, which he did not manage to consummate, the betrayal of the king of Spain. In effect, Cortés intended to be New Spain viceroy, but if the crown did not give him the position, Cortés would become independent of the crown and would become king of Mexico. This is the fundamental reason why; the crown instituted the residence trial and did not allow him to return to the Anahuac.

This is a small sample of who this sinister character really was, the one that the dominant hispanic culture of Mexico wants to maintain as a heroic and brave conqueror. However, the "Cortés syndrome" reaches us to this day in a total and forceful way, and although you may not believe it, it defines much of the behavior of those who come to power in these lands.

Stealing, lying, raping and murdering is the Hernan Cortés law. This ruthless attitude towards citizens, especially if they are of Anahuaca descent, historically begins with the massacres of Cholula and the Templo Mayor, but continues in rivers of blood that run through all the passages of our history and arrives with the massacres of Tlatelolco, and more recently Ayotzinapa and Nochixtlán.

This way of twisting the law, to violate it "legally", begins with Cortés. For example: Cortés betrays Velázquez, who has the permission of the crown to "rescue gold", that is to say, to steal. To invade and founding, another permit would be required, which had a higher cost in percentage of what was stolen. Cortes founded the city council of Veracruz, set up puppet authorities, renounced the Velazquez expedition and created another expedition, to act within the "framework of the law". Something very similar to the Pact for Mexico, reforming the Constitution to "legally" hand over oil to transnational companies. It is the same, but different.

If we do not know history, we are forced to repeat it over and over again. The invasion has not ended, before they arrived in galleons, today they arrive in airplanes, before they brought swords and harquebuses, today they bring dollars and euros, but at the end of the day, today they do more damage than in the XVI century. The Hernan Cortés syndrome is a requirement to be a civil servant or politician in this colonized, racist, classist and Hispanic country. Educayotl AC. "To decolonize is to dignify".