WHY WRITE ABOUT ANCIENT MEXICO 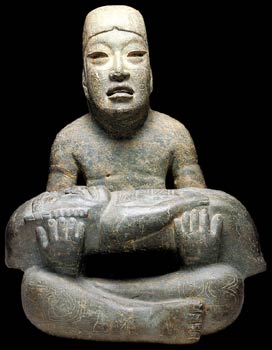 Not long ago, I was waiting my turn at the local bank, when I was approached by a man that recognized me. In a most sincere manner, he asked why some authors write about the past. He told me that he knew a well read and educated person that had in his library a large amount of historical books about ancient Mexico. He also told me that he himself was bored with the past and tired to read about ancient topics. He wanted writers to write about the future. He like the subject and wished there were more books about the topic.
I was very surprised to hear his commentary and I tried to explain that if all Mexican writers were still writing about the past, it was, perhaps, because it was still unresolved. I used the illustration of a sick individual whose doctor prescribed medication that did not cured the ailment and was forced to go back to the physician for new medication. In a way, we writers have to go back to the past and revisit it in order to understand our history. No doubt, some of this valuable information has been overlooked and it is necessary to bring it to light.

This obsession is experienced not only by Mexican writers like myself, but by others individuals in the world, like painters, musicians, historians, anthropologists and archaeologists. Studying and searching for the past tell us who we are and where we are heading. Going back again and again is to discover that History has been written in many forms. One has only to read a newspaper. The reports in the news, by the time they reach the reader, are events that took place in the past. Take any event reported in the Jornada and read the same in the Herald or any other newspaper. You will find that the article is a bit different.
History, then is written in various forms and under different circumstances. In our history, we have the ?official? version, but written by our conquerors. The same can be applied to wars. It all depends what side was favored by the writer and what nationality wrote the events.
Many times, these events were written a long time after the events and at other times, the events were reported by people who no longer remember the events with clarity. Our own history is related by many writers and in different forms. For instance, the accounts of the conquerors differ greatly by those given by the missionaries.
Today, even schools teach about President Benito Juarez under a different light and image. It all depends if Juarez is taught in public schools or private religious schools. Historical accounts can be compared to the same report given by the Liberal Party or the Conservative.Mexicans have to continue to write their own history.
Why is it important?
Consider this: a person cannot live, fully live, if he or she suffers of amnesia. Do you think that Mexicans, even those who have been fortunate enough to obtain higher education know about our history? No, not at all. We are uneducated foreigners living in our land. How many, for instance, know about the history of the revolution; how many know what took place in the last century, and how many know about the three centuries of colonial government.
It is sad, but true, that we know nothing about the 7,500 years of our history, called now Hispanic. You see, then, that if you, your children and your children?s children do not know your own history, your roots and origin, your identity, we will never attain stability, either social nor economical. We do not live, but merely exist. Now you see why it is imperative we turn our heads and eyes to the past.
The first transgressors were the Mexica, better know as the Azec. They were the last arrivals in the Valley of Mexico. Their leader, Tlacaelel, ordered the destruction of the records written by the Old Grandfathers, erased the their names and placed their own as the chosen people. When the Spaniards arrived, they in turn, destroyed the old records and set out to re-write our history. They knew so little and understood nothing. The Spanish arrived at the time when the civilization was in decadency, but did not bother to know why. After the Spaniards, the Creole wrote the history of ?their country? and at the end of the century, President PorfÍrio Díaz, ordered the ?official history.?
This official history contained myths and legends created, in most cases, by the vivid literary imagination of the time. An example is the legend of the Father of Independence, Don Miguel Hidalgo y Costilla, represented as an old man with graying hair, that is, what it was left on his head. In reality, the man was 56, healthy, strong, but the image of the priest was created for the Centenary celebration of the re-make of the ?official history of the country? and the desired effect was successfully obtained.
In the late 40?s, a tomb was discovered in Ixcateopan, State of Guerrero. This tomb was believed to be the resting place of Cuauhtemoc, who according to legend, Cortez ordered the feet of the Indian be slowly burn on a charcoal fire, to extract information on the great gold treasure believed to be hidden somewhere in the city. The president, at the time, was faced with the dilemma to to declare whether the bones found in the tomb were the bones of Cuauhtemoc, or they were the bones of some one else.
After a long debate, the president decided to announce to the people that the bones found were Cuauhtemoc?s. It did not matter if they were not. What it was important at that time, was to reassure the people of their identity. So, the bones were officially accepted and declared an old legacy, because it was also important that the State claim the old bones as a relic and symbol of the past.
In the Third Millenium, there is the need to revise the ?official history? for the reasons discussed beore. We must strive to obtain the truth in the matter that history be told as accurate as possible. Searching the past is absolutely necessary to exit the colonial labirynth we have lived in for five centuries. Our historical wounds must be healed totally and completely once and for all. The healing is necessary to stop the festering inour hearts, minds and race. You will be surprised to hear that many do not believe this is necessary because nothing wrong took place long ago.