The history of the "discovery" of America, its violent conquest and its unjust colonization during the last five centuries, has been on the hands of the victors, and the sons of the sons of all Europeans who have continued arriving to Mexico, to make fortune through the "natives" and their apparently inexhaustible natural resource. Yesterday gold and encomienda,[1] today oil and minimum wages, but history repeats itself. But knowing history, frees people from cyclical and repetitive mistakes. Thus, it is essential for Mexicans to know their own "true story", so that there are no more victors and defeated, dominated and dominating, colonized and colonizers.

"Was not like that what the Dzules (Spaniards) did when they arrived here. They taught fear; and came to wither flowers. For their flower to blossom, they damaged and sucked the flower of the others." (Book of Chumayel Chilam Balam)

Spain had just expelled the Arabs, who had dominated their peninsula for over eight hundred years.[2] The kingdoms of Castile and Aragon, in 1479 had formed a single Kingdom through the marriage of Ferdinand of Aragon and Isabella of Castile, it was a Crown "new, poor and with devastated territories" and men in arms. Also, Europe had lost the commercial passage to the East by the taking Constantinople[3]and the near east by the Turkish. The European economy at that time depended on the trade in spices and multiple consumption objects imported from those distant lands. "Merchants" from all the major European cities and especially Venice and London completely dominated commerce. 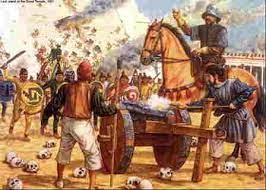 "Christopher Columbus was financed by Venetian merchants, and not by the few and modest jewelry that Isabel la Catolica might have had, what paved the way to our continent". (José María Muría. 1982) [4]

Immediately after the accidental encounter with the Cem Anahuac (North America) and the Tahuantinsuyo[5] (South America), the spaniards started the invasion, destruction, pillage, exploitation and extermination of "discovered" peoples, with the divine permission of the catholic church and the legal support of the spanish crown.

"In 1493, the Spanish Pope Alexander VI, supreme arbiter of Christendom, ceded the territories seen by Christopher Columbus and his companions, and "all islands and firm land discovered west and noon" in the Meridian, one hundred leagues away from Azores and Cape Verde to reduce ?the inhabitants and naturals of these places into the catholic faith" and to collect as prize of the crusade, "gold, aromatic things and many others of great price, of diverse characteristics and quality." (José María Muría. 1982)

The search for alternate communication routes with China and India later meant for Europe, not just maintaining trade, but a continental and global source of power. Oriental technology was far superior to the European, not only the compass, gunpowder, ceramics, silk, paper and metal alloys; but the ancient and better navigation technology, it is noted that China and India, are two much older civilizations than the European. An example is that in 1400 CE the total Chinese fleet included 3,500 ships, of which 400 were warships, 400 merchants and 2700 Coast Guard.[6]

"Probably, the safest ships in the world, and also the largest were Chinese, and from the Sung times, Chinese merchants traveled to points far from their own shores. Ibn Battuta, who visited India and China in the 14th century, wrote that at their times all trade between Malabar and South China was made in Chinese ships....Arab sailors were familiar with the long ocean voyages, and had safe ships. It is interesting to note that the Arabs who had contact with the Vasco da Gama people were not impressed by European ships; they admired their sturdy construction, but they judged them little slow and manageable.... Altogether, it is likely that the Arabs should be placed next to the Chinese among the peoples of the seas that in the 15th century could have been able to circumnavigate Africa and perhaps crossing the Pacific if they had tried it." (J.H. Parry. 1989)[7]

This way, it is interesting to understand that Asian peoples had a technology far superior to the European and that when it was appropriated by the Europeans, it was used for commercial, military and expansion purposes. Technologies copied by Europe from Asia and which later served them to invade and take over the entire planet, Asians despite having invented them, despite having the military and maritime power, never attempted to take over and subjugate the planet.

The conceptions of life, the world, war and power, between the Europeans and the rest of the world have been totally different. So the "heroic" feat of "discovering the new world", was not more than a warfare and commercial adventure, funded by greedy merchants and carried out by the poorest and most ignorant spaniards of the dark middle ages, at any price and without any scruples. "It is next to impossible to imagine 15th century explorers, looking for the North Pole. They were practical men, just like their rulers and the investors who financed their travels, and their objectives were also practical: mainly to establish concrete contacts with specific non-European countries, countries whose existence was known, advanced culture and with commercial importance, countries whose inhabitants could provide valuable goods and countries whose rulers could seek partnership and political support. The exploration could reveal other advantages, goes without saying: unexploited fisheries and fertile islands with feuds and arable land available to whomever should wish to seize them. However, these Islands were better if populated, preferably by docile and laborious people... For the most part, the explorers did not seek new lands; they sought new routes to known lands... Thus, the originality and importance of the 15th century travels was not to reveal the uninhabited and the unknown as links, through usable sea routes, regions away from the populated and known... Columbus experience wasn't entirely different; but, obviously, was not the same in the case of native inhabitants. Columbus did not discover a new world; established contact between two worlds, both inhabited and both ancient in human terms." (J.H.Parry. 1989)